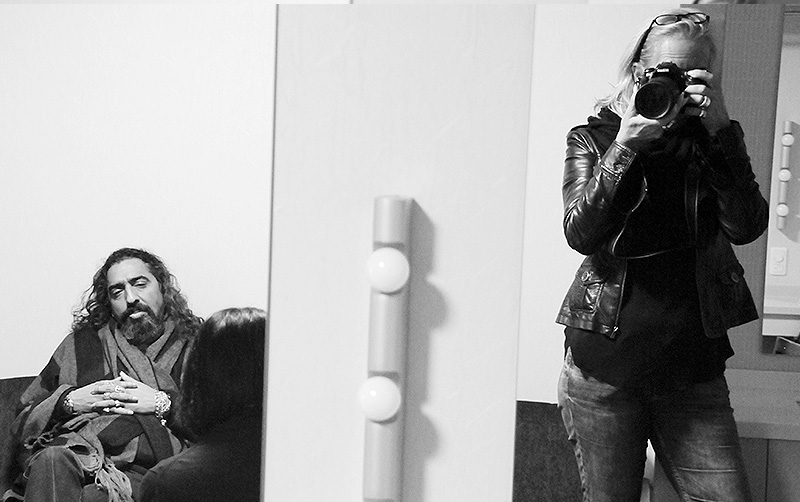 “I’m always caught by surprise, I can never prepare myself, not even for one photo” admits Diego El Cigala. Diego in disbelief shakes his head with his black mane, while presenting with his photographer, Anya Bartels-Suermondt, their book “Cigala – Garganta de Arena”. The book, which was described by the cultural critic of El Pais as a “monumental work of art” in his review of the book “4 Kilos of Cigala”. Before “Cigala – Garganta de Arena”, Anya had immortalized José Tomás, the most prominent bullﬁghter of the century, in a book of equal importance. Anya gave an original version to Cigala, who became infatuated with the work. This was his response “please Anya, I would like you to make a book like this for me”.

Years before, Anya had become enchanted with Cigala’s voice, which was already celebrated throughout the world. Cigala meanwhile had become enchanted by Anya’s photography capturing both Cigala’s music and personality, revolving around a sense of close intimacy and respect for musical genius. “When Anya is photo­graphing me, she captures my individuality and not what others want to see. Furthermore, Anya has the skill and ability to capture an elegant photograph even when I’m wearing a tracksuit or bathing suit”. This bond forms the basis of their “Mano a Mano” relationship, which brings the two together in their creative process.

The two artists have traveled together throughout the world, from Latin America to New York and Tokyo, remain intertwined through passion and dedication on a shared path of music and photography. “A day never goes by like it was planned, something always happens and everything turns spontaneously. One moment of feeling can profoundly change the way Diego acts, his emotions are embedded within his soul” Anya says when she describes Cigala. “I don’t know another soul more authentic or who lives more intensely than Diego. He roars when it is time to shout, he either cries of sadness or dies of laughter when things make him sad or happy. He always is himself, it does not matter if we are in the Presidential palace in Buenos Aires or in a town bar in Brixton. Diego is always himself, unpredictable in his unique open and true attitude. His character moves in front of my camera and through the years, we have managed to capture this unique aura around him, he feels comfortable around my lenses, which allows us to see into his world. We work as a family and I recognize every emotion he feels and I capture them through my camera”.

Diego El Cigala, was born into the Rastro neighborhood of Madrid while Anya Bartels-Suermondt comes from Zooviertel in Dusseldorf. Although they come from different worlds, their shared experiences crossing continents, endless days and nights in studios, airports, ports, highways, concert halls, and hotels have brought them together. “The photographer of the Artists” as Anya is called in Spain and Mexico and the Grammy winner always travel together with emotion, art, chaos, inspiration, intimacy, and authenticity. Sometimes with tears, but mostly with smiles, their journey is always that of a united Mano a Mano . This native of Madrid and Spain’s adopted daughter from Dusseldorf make an instantly recognizable pair. When asked about having a German photographer in an interview, Cigala described Anya like this: “My photographer? German? Dusseldorf? That is what she claims, but it cannot be, she is like me, full of passion and the only thing which she is missing to be a gypsy is black hair. Anya probably comes from Cádiz and because of that she creates such photos”

The concert on the banks of the Rhine will be a special occasion to witness a master perform. Welcome to Dusseldorf Diego el Cigala! 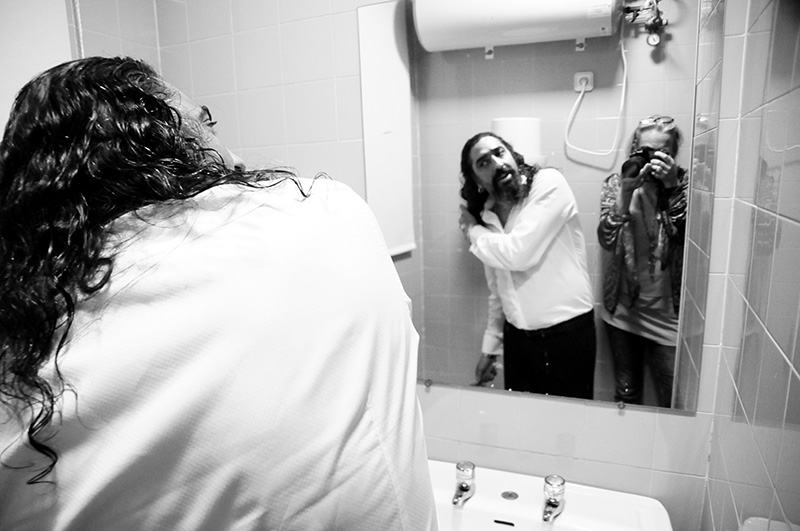 Born and raised in the Rastro neighborhood of Madrid in 1968, Ramon Jiménez Salazar, El Cigala, began his musical career from a very young age.

At the age of twelve, El Cigala won two musical contests, which quickly put him into the focus of Spain’s musical masters. Today, the grammy winner and master of various styles of music such as ﬂamenco, bolero, tango and salsa is considered a world renowned artist. El Cigala is an ambassador of Spanish culture and internationally followed by other notable artists such as Nobel laureate Gabriel Garcia Márquez, who before his death, attended a concert of his friend, Diego El Cigala. When asked in an interview, who he would like to meet most in the world, Diego Maradona responded; Diego El Cigala.
Cigala performs in the most recognized blues and classical concert halls in the world, from the Montreux Jazz festival to the temple of tango, the Teatro Gran Rex in Buenos Aires. Cigala’s performance at Carnegie Hall in New York was called the best concert of 2015 by The New York Times. The awestruck audience celebrated his performance with a standing ovation which was silenced only when the organizers turned off the lights, forcing the audience to ﬁnally leave. No one wanted that special night to end. Diego dedicated the concert to Amparo, his manager, wife and love of his life, who passed away shortly after from an incurable disease.

Diego El Cigala lives with his children in the Dominican Republic.

Born in Duesseldorf, the journalist and photographer moved from Berlin to Spain in 1995 for a sabbatical. Having dropped her luggage on this charismatic yet rough soil, now almost 23 years ago, she was caught in fascination for this country, its art and moreover its people. Anya’s photographic interpretation of the Spanish culture is being celebrated domestically and abroad and has been perceived as her own visual handwriting. Even his majesty, the Spanish King Juan Carlos, found words of appreciation and repeatedly congratulated Anya on her photography books in personal letters. He particularly thanked her for the “extraordinary quality of her photographies and the excellent visual reflection of the Spanish culture” through her books and exhibitions.

From her now permanent residence Madrid, Anya is traveling to various countries for reportages and documentations and particularly takes her camera lens to African, Latin American and Asian cultures. “I love being
at places, which are foreign to me and where I can learn; the more foreign the place the better; common places limit my curiosity, because I know them already”. Through her catchy, intensive and likewise authentic portraits of artists and personalities, like toreros, musicians, dancers, football players, actors, boxers, poets – spectacular collections have been captured in photography books, music productions, album covers and exhibitions, which have been excellently acknowledged by critics and press. As documentarist and celebrated photographer, her clients encompass many of the best known artists of Spain, Mexico and Argentina.

Anya is working for Diego El Cigala as his exclusive personal photographer.

Each photograph is limited in three formats to a total of 20 originals: 5 in 120x180cm, 5 in 80x120cm, 10 in 60x90cm. The photographs will be produced with high-resolution FineArt-Print in the photographic laboratory Grieger Düsseldorf. A price table can be found here.